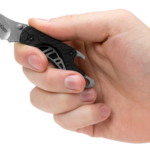 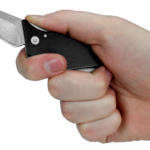 Fred Perrin is a former French Army Commando, a national Tae Kwon Do champion, a European full-contact stick fighting champion, and one of Europe’s most sought-after close-combat and self-defence instructors. He is also an accomplished custom knife-maker and craftsman, specialising in his own uniquely functional designs optimised for military and personal-defence use.

Perrin’s original FB04 Street Bowie was one of Spyderco’s earliest fixed-blade collaborations. Its versatile Bowie-style blade offers both power and finesse, making it suitable for a wide range of cutting chores. The injection-moulded Fibreglass-Reinforced-Nylon (FRN) handle features hand-filling contours and moulded Kraton inserts that, together with the deep index-finger choil, literally lock the knife into the user’s hand for superior control.

Long a favourite among savvy knife users worldwide, the Street Bowie is now back by popular demand. Like the original, the current version boasts a flat-ground VG-10 stainless steel blade. In classic Bowie style, it features a straight clip point that centres the tip on the knife’s centreline for maximum control and penetration. An extended section of jimping (textured grooves) on the spine of the blade mates seamlessly with a moulded, textured panel on the handle for additional security and control. To reduce its reflective properties, the blade has a durable black ceramic coating.

The new Street Bowie features a completely redesigned sheath. Injection moulded from polymer, it has a high throat for positive retention while still providing a full grip on the knife at the outset of the draw. It includes Spyderco’s versatile G-Clip attachment, which supports both belt carry and clip-style inside-the-waistband carry. Configurable for vertical, horizontal, or diagonally canted carry, it can be attached to both sides and both faces of the symmetrical sheath.

The Street Bowie is an incredibly versatile knife that is ideal for both utilitarian and personal-defence applications. It is also a reflection of its designer, Fred Perrin, and his exceptional understanding of functional simplicity.